I left New Orleans on Easter Sunday - after having watched, I assure you, some of the Easter Vigil from St Chad’s (which was long, two and a half hours !).  Remember, I am six hours behind UK time, so was able to watch on late Saturday afternoon my time as the clergy and congregation set to on a marathon vigil.  Way too long.  Way too much dead and down time when nothing happens, not because I sense any desire or longing for stillness and reflection, but mostly, I suspect,  because of not much thought going in to coordination. planning and flow.  I’m all for brisk liturgies., I think most congregations are too.  Clergy, take note ! As my Dad said about his parish’s Vigil when it had finally ended - ‘Phew !’

The route out of New Orleans followed the Mississippi River along the levees, which are huge and go on for miles and miles.  Pretty much everything on the land side of the levees would be under water a lot of the time if not for the flood defences.  The Mississippi is huge, brown,  and lined with ships and oil refineries.  I guess all the black stuff comes from the Gulf of Mexico, where you can see the oil rigs off shore.  Anyhow, it is pretty industrial all along the banks of the Mississippi.  I headed for Geismar just south of Baton Rouge.

Monday took me further along the banks of the river, through Baton Rouge to about 10 miles beyond New Road, passing over the grand Mississippi on the Audubon Bridge.   Quite a sight.  At the far end of the bridge I came across a few women cyclists going in the opposite direction, west to east, who were part of a group of 25 women,  a women’s only tour, who were cycling the Southern Tier on a supported trip, which means their bags are carried for them in a sag wagon and they can travel light.  Everything is organised for them. They stay only in motels, a bit like me (although I do have a small tent for what I hope will be the very few occasions I have no option but to camp).  They were evidently women - well, let’s say of a certain post menopausal / retired  age, who must be pretty well off to spend six or seven weeks crossing the country on a supported / motel trip (those kinds of organised trips do not come cheap), and probably mostly ‘on the other bus’, as my neighbour Peter (Edgbaston Golf Club, Bridge Club, Volvo, Conservative, keen on dogs, retired solicitor, one of Edgbaston’s finest and best- you get the picture ?) would call anyone of alternative / whatever lifestyle.  It’s a good description of these women, I think.    The ones I talked to were barely pleasant enough, and I did feel that because I was a man I was definitely to be treated with a whiff of suspicion and caution belonging as I do to the patriarchal male hierarchy !  So, I played up to it and asked all sorts of probing questions, such as where they were staying tonight, and of course they were very cagy and would not give me too much detail.  Security and safety of the fairer sex, I suppose.  Mind you, can you imagine anybody being brave enough to take on 25 post menopausal women with attitude?!  Anyhow, respect to them for undertaking such a trip at their stage of life.

Still following the Mississippi, or various tributaries, on Wednesday I headed for Bunkie LA.  The Louisiana landscape here is very flat, and mostly sugar cane in the fields, still very small and low, but by August it will be tall and ready for harvesting. I think.  I guess there will have been sugar plantations here during the 18th and 19th centuries under the French whose colony it was.  The area does have a very French feel to it still.  The US brought it off the French in the Louisiana Purchase in 1803.  Note to Putin - better to buy than to invade and destroy.  I think the Americans and the French in 1803 had some sense. The counties are called parishes here, and pretty much all have very Catholic names - St John parish, St Peter parish,  La Salle parish and so on.  The churches dotted along the way are generally well kept, in contrast to the dilapidated clapboard houses and down at heel trailer parks that are often just across the road.  The names in the graveyards are almost all of French origin, and in the rural parishes a variation on perhaps five or six French sounding names.  The French and Catholic influence is still very much alive and kicking here.

LOUISIANA / CAJUN CUISINE:  Well, I would like to say that I’ve been able to taste some of it, but actually when you see a place that says Cajun or seafood or crawfish or shrimp or catfish, usually it is a greasy spoon that sells fried everything.  I’m still waiting for something a bit more upmarket in Louisiana / Cajun food, but in the meantime have had some of the greasy spoon stuff, like a crawfish Po-boy.  A Po-Boy is just a sub like bread sandwich.  Crawfish are shrimp like things from the fresh water bayous, shrimp come from the sea.  Or so I’m told. Catfish is nice, but looks ugly in the original, and the name doesn’t endear it.  Mind you, I do like fried catfish. Just best not to imagine how it looks in real life, and not to think of the name.

DOGS:  Cyclists doing this route go on about the Louisiana dogs that bark and chase and worse through these parts.  Since leaving New Orleans I have had lots of dogs take an interest in me, running out of their trashy trailer park lot and snarling and barking away.  My tactic is to take them on, stop, shout, swear, and throw Tabsco sauce at them from a bottle I carry.  A drop of that on the nose or in the eyes seems to do the trick.  Mostly, for all their snarling and barking, they are pussies and back off when you stand your ground.  Usually, it’s on quieter rural roads that this happens.  I guess the main roads have culled those that behave in that way.  Anyhow, you have to keep your eyes and ears open and be ready to take action when the dogs take an interest.

WIND:  Did I mention the wind ?!  Well, I have been fortunate for most of the last week with the wind generally coming from the southeast.  It has served me well. Long may it continue.  The women I mentioned earlier were going in to the wind.  I wonder what they will make of that ? No doubt the talk around their dinner table will be some kind of patriarchal male conspiracy, probably blaming God because He is a he and has it in for them. I’m sure my luck won’t last forever, but I will enjoy a little tailwind whenever I can.  It makes a huge difference.

The western part of Louisiana changes from sugar cane to rice fields and flooded pens for raising crawfish and catfish.  It is still flat.  My route took me to Kinder LA, which is on a Native Indian Reservation, and unbeknown to me I had booked myself in to a little cabin on the reservation where there was also a casino.  Apparently, Native Indians and casinos go hand in hand.  The cabin was more a small static mobile home with all mod cons and very comfortable.  To eat, I had to go to one of the food places in the casino, and boy, was it an eyeopener.  The place was huge, with hundreds and hundreds of flashing slot machines and gaming machines and whatever else people like to gamble at, and the clientele were - well, mostly geriatric, barely mobile, on zimmers and walking frames, mostly huge, and zombie like.  They just seemed to sit there- because most of them could only move with great difficulty - for hour after hour putting money in to the machines and pulling the handle and ordering up food and drink via app to be brought to them.  The waitress at the place I ate told me that some people come for a week or a fortnight and just gamble day and night.  In fact, you wouldn’t know if it was day or night in the place.  A sure way to lose money.

The next day, Thursday, saw me pass through the rest of western Louisiana and in to Texas, where I will cycle for almost a thousand miles.  I stayed in a lovely little cabin near Newton TX, just like something out of the 1950s, but very comfortable and such a nice Mexican lady, Ade, running it.  The roads in Texas just become bigger, with thankfully mostly wide shoulders for me and my bike.  On Friday I headed towards Kountze TX, mostly along a highway that was just straight as an arrow. It’s noisy riding, but fast and direct and the wide 10ft shoulder gives some good protection from the traffic.  The route planners evidently think some of these roads are the best in that part of the country.  Other times I am routed through very rural, pastoral and bucolic byways.  That’s where the dogs are ! So, take your pick, nasty dogs or logging trucks.

Churches in Texas are also bigger.  Mega massive things.  Sometimes two next door to each other.  There is evidently money in religion here.  Anti-abortion / pro-life billboards abound.  It looks like a big issue here in Texas.  You don’t see anything about frying people in electric chairs or gassing people, especially if they are poor and black, mind you.  Or the fact that more children and teenagers die in gun related incidents than die from other accidents.  Difficult and intractable issues, I know, but I find the black and white moral certainty of these debates as presented in these parts so depressing.

In Texas the logging trucks seem even bigger, and the pickup trucks that the majority of people seem to drive also increase in size.  I think everything is bigger in Texas.  Eastern Texas which I will be passing through for the next three or four days seems benign, at least as far as availability of services goes.  But, after Austin TX the route will go through much more austere and isolated parts of central and western Texas, including the hill country and then along the border with Mexico and the Trump Wall.  I wonder did Mexico ever end up paying for it as he said they would ?  There are stretches of 50 miles plus with no services, so I will need to stock up on water and food to ensure I make it from one point of civilisation to another. The Border Patrol police are inclined to stop cyclists and ask for ID, I’ve been told.  I shall just use my best Maggie Smith to let them know I am not a wetback.  You do wonder why they haven’t worked out that someone on a bicycle with  brightly coloured panniers and wearing lycra cycling shorts is likely not to be an illegal immigrant ?  Mind you, I’m told they have water and ice and are willing to share it.  So, I shall be just so charming !  I hope the Wind God, He is to my back !  I wonder how the Womenx25 are getting on as they ride straight in to a southeast wind on their way to Florida ?! Stop thinking evil and wicked thoughts, Christopher !! Enough ! 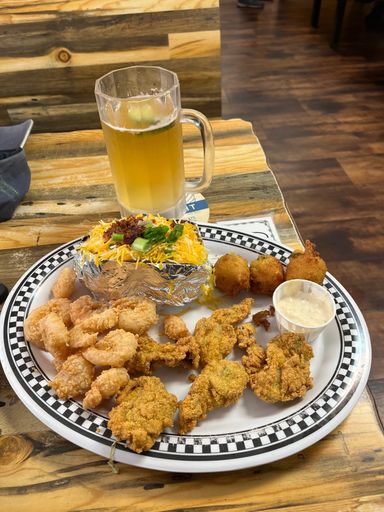 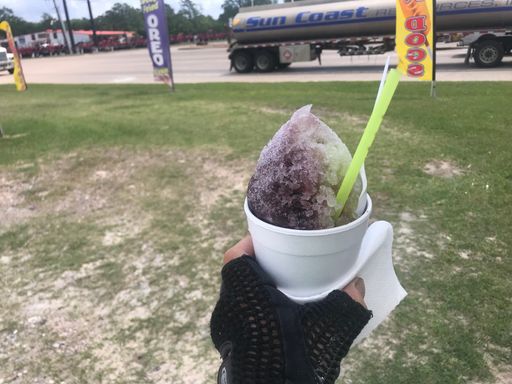 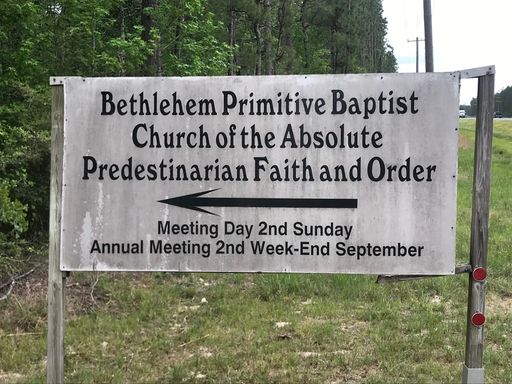 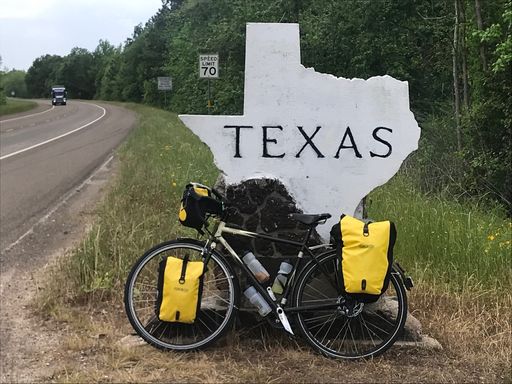