The second week, well almost a week, of riding.  I post this from New Orleans LA where I have taken a day's rest break, and so have time to post.  I've gone through four States along the coast - Florida, bits of Alabama and Mississippi, and now I'm in Louisiana.

This second week of the ride I been  heading for and along the Gulf coast, the Gulf of  Mexico - hitting the coast at Pensacola Fl, where there is a big US Navy Air Station, home of the Blue Angels, the US Navy equivalent of the Red Arrows.   I thought that after the mediocrity of northern and Panhandle Florida, hitting the Gulf coast would see some improvement.  Not the case in Pensacola, which  is a dump.  Lots of derelict houses and down at heel neighbourhoods, lots of hobos and indigents, and some pretty dodgy areas that I cycled through. These sorts of areas of surprisingly distressed.  It’s not the sort of thing we see at home, certainly not to such a degree. You need to get beyond Pensacola along the coast for things to tick up, and increasingly it becomes beach holiday territory.  Very soon after Pensacola, I passed in to Alabama, which along the coast is very nice, and on along to Fort Morgan where I got the ferry over to Dauphin island.  The fort and the island are at both sides of the entrance to the bay leading to Mobile AL, a big port, and was the scene of a siege and naval battle during the American Civil War for control of the bay and the port.  Along the way to Fort Morgan another cyclist out for ride chatted to me and then passed on, and when I got to the ferry toll he had already paid the $6 for my ferry ticket.  That was nice, wasn’t it ?  Welcome to the US !

Dauphin Island is like one of those islands you find off the Atlantic coast of France - such as Ille de Noirmoutier - pretty exclusive in a contrived run down sort of way, and with exclusive prices to match.  The excuse is that everything has to be brought over from the mainland.  The B&B I’m staying in will be by far the priciest of the trip, but pleasant in a homely sort of way, and I can listen to the “Gone With The Wind” conversation of the family out on the terrace.  I am expecting Rhett Butler to say “Frankly, my dear, I don’t give a damn” to Scarlett O’Hara.  If you are too young to get that, Google it.   I look out on to the bay with lapping gentle waves and a warm breeze as I sit and write.  Lovely.

POLITICS:  Well, being the South, I am not surprised that I have been passing through conservative areas of the US.  Very much Trump territory.  There has been a continuous presence of Trump signs, both from the 2020 election, as well as ones looking forward to the 2024 election.  “Take Back Control” slogans.  As well as “Trump Won” signs and flags.  He’s evidently very popular still in these parts.  I think if you are a Democrat round here you keep your head down.  All of this conservative political stuff is conflated with conservative moral issues and stands, so I’ve seen lots of pro-life / anti-abortion billboards around, lots of stuff about family values, and the dangers presented by alternative ways of life and being, billboards promoting what can and cannot be taught to children in schools.  It’s all part of a piece, I suspect, with the very conservative fundamentalist Christian presence I’ve witnessed, especially in the preponderance of conservative, evangelical and hard line moralistic, salvation and damnation churches.  Now, some of it I can find a place for, and aspects of it ring true with me.  Goodness, kindness, honesty, respecting and valuing life in all its stages, good relationships and nurturing families, being kind and generous to others - what’s to argue with ?   It’s just the absolutist and exclusive nature of the billboard morality that I find difficult, because it completely ignores any nuance or subtlety or complexity of life, or acceptance of and respect for other views and ways of life.  If I have learned anything about moral thinking, it is that nothing is as simple or straightforward as moral certainty.  More often than not moral judgement is a messy, grey and complicated matter, involving elements of compromise in decision making and doing and achieving the greatest good possible in any given situation.   I’m not sure they understand that here.  I think it's a question of battering others in to submission until you get your way 100%.  Which leave a lot of battered, hurt, alienated and isolated people along the way.

Another thing I think I’ve learned is that the more trenchant and insistent people are about their own moral stand and outlook   - especially when they are trying to make judgements of others or impose things on others and the rest of society -the more it says to me that there is something being hidden, denied, feared about themselves and who they are and what they really feel and think.  Much of it come from a kind of fear.  What if they started to think a bit more laterally and flexibly ?  What would happen then ?  Would the whole world come tumbling down for them ?  Safer just to be insistent that you are right and everybody else is wrong.  As I get older, I become more unsure and uncertain about most things.  And more ready to listen to what others think and say. I’m content with that.  I think it’s a pretty honest place to be

WIND:  No, not flatulence, but headwind, sidewind and following wind.  Cyclists obsess over it.  Headwind bad, following wind good, sidewind kind of okay.  Hills, rain, sleet, snow, heat - whatever - nothing is as debilitating as cycling in to a brisk headwind.  My first few days in Florida I was met by a headwind that did not shift all day.  It wasn’t the worse, but the cumulative effect over a day is pretty exhausting.  Then it changed and shifted from the southeast which gave me a great boost and I was able to bowl along the flat and straight roads.  When I meet other cyclists the conversation quickly turns to the wind and how it has been.  The consensus is that on this route, east to west across the southern States, it is about 50 /50. You win some days, you lose others. Some routes definitely have a wind preference, for example the West Coast route from Vancouver BC down to the US border with Mexico is definitely to be ridden north to south with the prevailing northerly wind.  I did it in 2019.

ALONE:  I think some people believe that I am a bit odd to be doing these kinds of rides by myself.  Yes, I can see that it looks a bit odd.  However, I am quite content with my own company, and it is surprising how a day goes by when I am only concerned with the wind, the weather, the road, the traffic, the bike, getting food and water and accommodation, and my own thoughts.  I never feel that I’m bored or long for some company.  In the evenings my concern is to have a shower, get something to eat, and watch a bit of catchup TV (using a VPN which enables me to watch BBC catchup when out of the UK), a bit of reading, and tootling about on my computer, and writing things like this.  I meet other cyclists along the way, usually those going in the other direction, and we chat for a few minutes and that gives me enough to think about for a while about what is ahead.  There is quite a bit of planning involved in this endeavour and I tend to have planned ahead a good week with where I will stop and stay.  I don’t leave it, as others sometimes do, to work out where I will stay, eat, rest until I get somewhere, because then I never now what I’m going to get.  I like to know what is waiting for me.  I guess it would be nice to meet up with somebody compatible and cycle together for as long as it suits, but so far nobody has turned up.  I’ve met some good people on my trips over the years and and made some good friends, a few of whom I will see at the end of this trip.  So, I am not lonely by any means, and quite enjoy my own company on these trips.  The mind is always active as I cycle along, and I’m watching, noticing and taking things in.  I form an opinion pretty quickly about what I see and hear.  That’s my mother in me.

NEW ORLEANS:  Friday and Saturday of the Easter weekend I am in New Orleans LA for a day’s rest before moving out on Sunday.  I’m staying in an Airbnb place, which is just what I need for the two nights.  Very simple, in a neighbourhood  about a mile from the city centre and the French Quarter, which is where it all happens.  As with most of the neighbourhoods here in NOLA, the houses are small clapboard constructions on small stilts, apparently because the foundation is mud and it all moves over time.  Even the nicest neighbourhoods and houses seem to have a distressed look to them, many in need of some TLC and renovation, but it seems to be the look and the way.  They could be lovely, but either there isn’t the money or the inclination to put that little bit of gloss on them.  Maybe it is in part the enduring result of Katrina, which devastated this city with hurricane and flood.  Where I am staying will have been tens of feet under water in 2005. You can tell that the house has been renovated somewhat and is still a work in progress.  Anyhow, it suits my needs and budget and has all that I need. I’ve been able to do a bit of work on my bike, do some laundry, have a lie in, and also to wander around the city and see some of the sights and people.  And, believe, me there are some sights to be seen, mostly in the people !  I have seen backsides the size of which I have never seen before, and they are not shy of showing them off with what they wear. I think it's a thing in certain communities here. It is vibrant, exotic, challenging, noisy, very mixed ethnically, and has an all pervasive whiff of dope being smoked along with the smell of the drains and the stench of decaying rubbish.  I’d like to come back one day and explore a bit more.  It is a city and people a bit on the edge.

Easter Sunday I will move on west, following the Mississippi River out of New Orleans and along to Baton Rouge.  Let's hope the wind is in my favour. 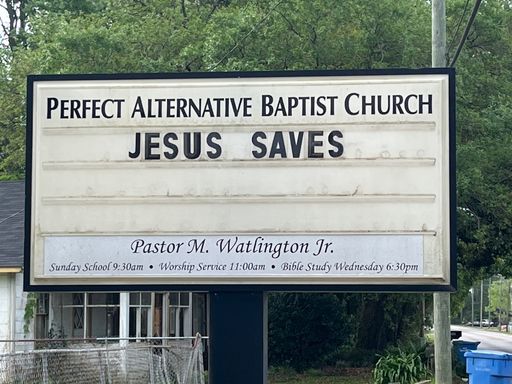 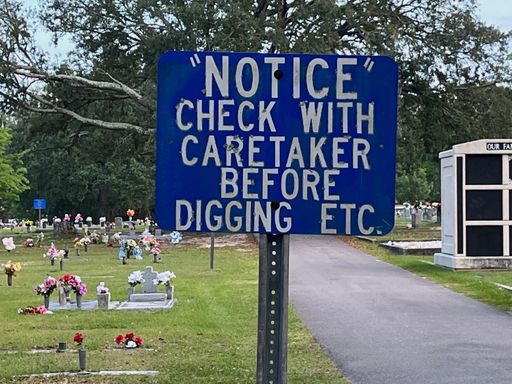 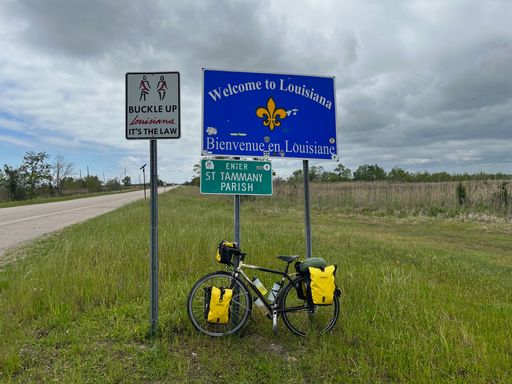 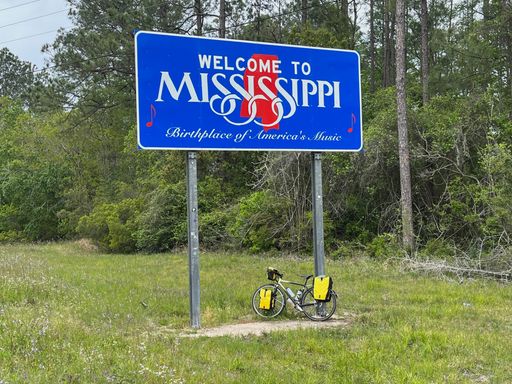 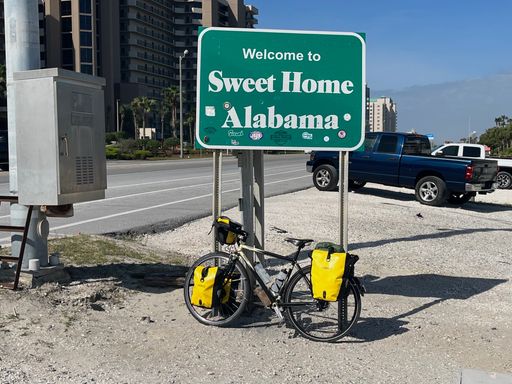 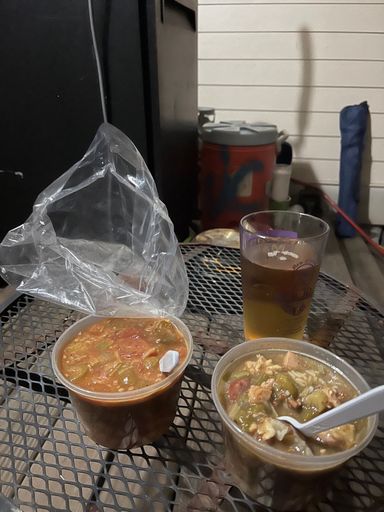 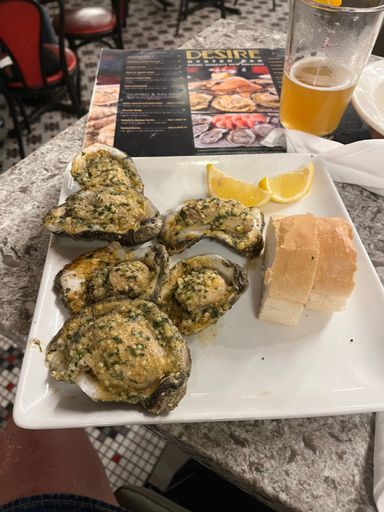